One of the innovations which distinguished the Waldzithers of C. H. Boehm from its traditional ancestors was the use of a Preston type tuning mechanism which he had adapted from the Guitarra Portuguesa (as Martina Rosenberger has shown). The tuners that are found today on most Boehm instruments do not suggest this origin at first sight because C. H. Boehm simplified his tuners in several steps and thus departed more and more from his Portuguese predecessors. But the early Boehm tuners leave no doubt whence the original inspiration for their design came from.

But Boehm took over only the idea from the Guitarra Portuguesa: From early on, he seems to have produced his own tuners (he registered his tuners as early as August 12th 1897 at the patent office as a utility model). With 9 slots evenly arranged in a fan, it is likewise impossible that these Waldzither tuners have been produced by reducing the tuners of a Guitarra Portuguesa: These are indeed also arranged in a fan, but always display two groups of six slots with an empty space in the middle (but some of them had already screws which have a square head and were designed to be twisted with a tuning key). A derivation of these tuners from the Watch Key or Preston Tuners of the English Guitar (what has also sometimes been suggested) is also very unlikely for on the English Guitar the slots for the screws are always parallel to each other, and not arranged in a fan. And here, the screws do not protrude, as it is the case with the early Boehm screws and their Portuguese predecessors. That Boehm produced his own tuners in the 1920s is documented through a photography on page 10 in the 1926 Catalogue.

The following years are estimations which should be correct up to a few years. But although the dates given here correspond to the dating of the Boehm labels, they cannot be maintained with the same certainty: Tuners can be replaced, and screws even more so. And it is also possible (and not even improbable) that C. H. Boehm may have used different types of tuners for his instruments at the same time. 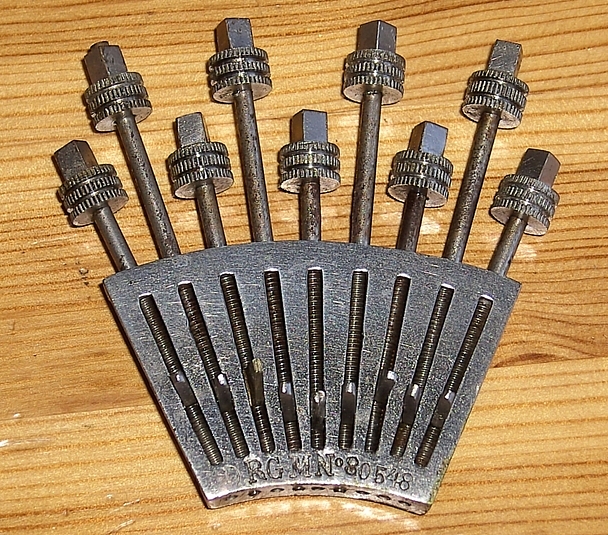 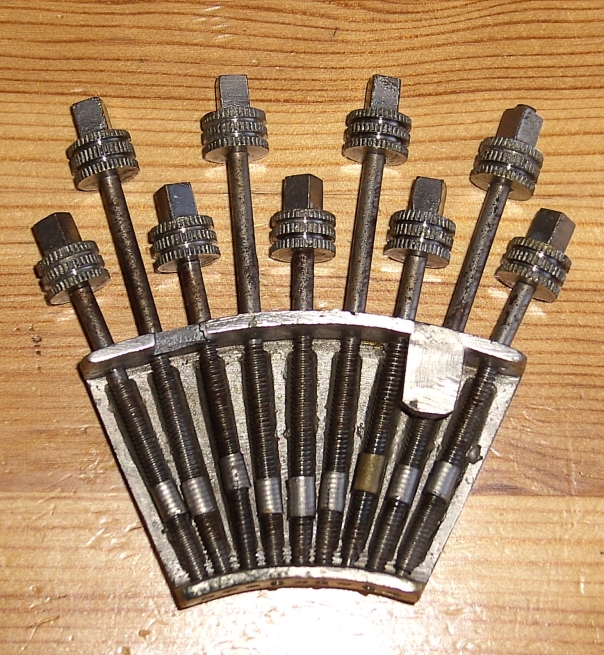 This is the oldest set of Boehm tuners known today; the design of the instrument and its label suggest that it was built in 1897, the founding year of the company. Presently, only one instance of these tuners has been found on which the D.G.R.M. Nr. 80548 is engraved, which Boehm had received when he registered his tuners as a utility model. The similarity between these tuners and the tuners of the Guitarra Portuguesa is striking.

The other Waldzithers until 1900 have the same tuners, but without the engraving of the D.G.R.M. number. These early tuners are fixed with two pins and a special mechanism at the head of the instrument.

The Waldzithers that were built from 1900 on are fixed with a simple screw on the head of the instrument. Apart from that, the design of the tuners stays the same; the transition instruments which bear the “Musikwaaren” label with the Walddoline also still wear these tuners. 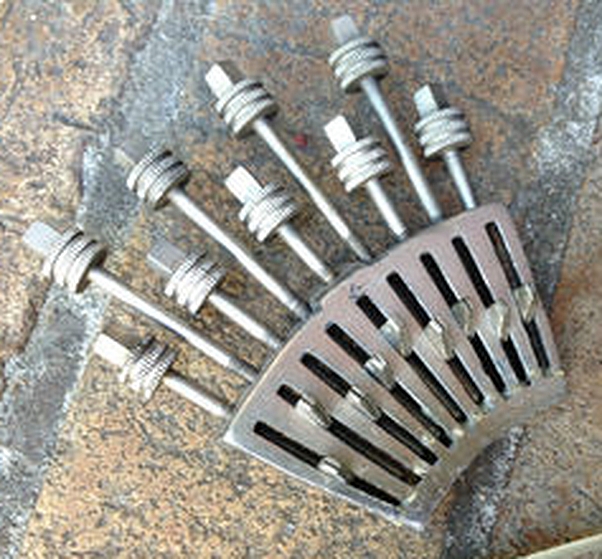 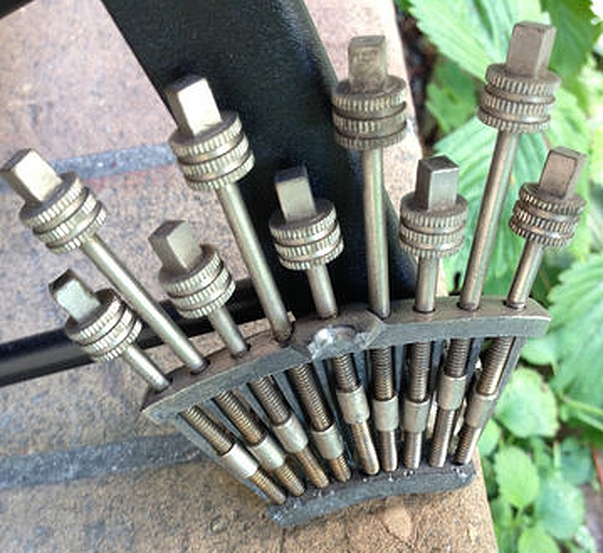 It seems as if Boehm had found the final design for his Waldzithers somewhere around 1905; at this time, the differentiating of his instruments into the Models Nr. 1-4 has also already taken place. The earliest instruments with this standard design (and the “Waldzither-Fabrik” label with “Egyptienne” font) still have tuners with the old Portuguese screws, but they wear tuners with a single hump in the middle (which is used to fix the screw at the head of the instrument). Until now, only one instrument with this type of tuners has been found that still has the smaller dimensions of the early Waldzithers. G. Becker, a Hamburg rival of C. H. Boehm as an instrument maker, used a very similar type of tuners before the First World War on his instruments (which he called “Mandolin Zither” because the term "Waldzither" was copyright protected). 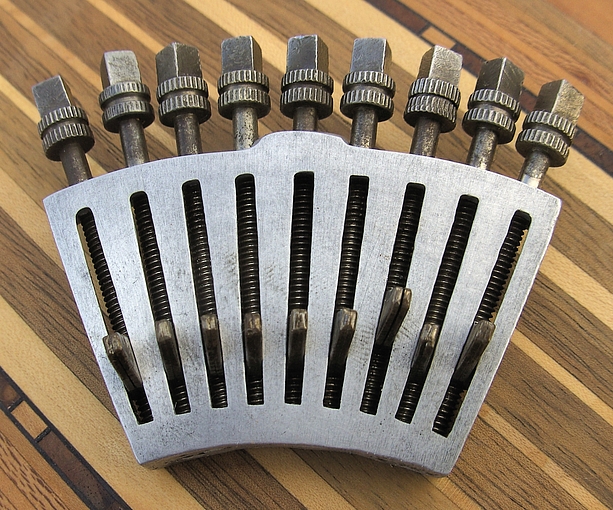 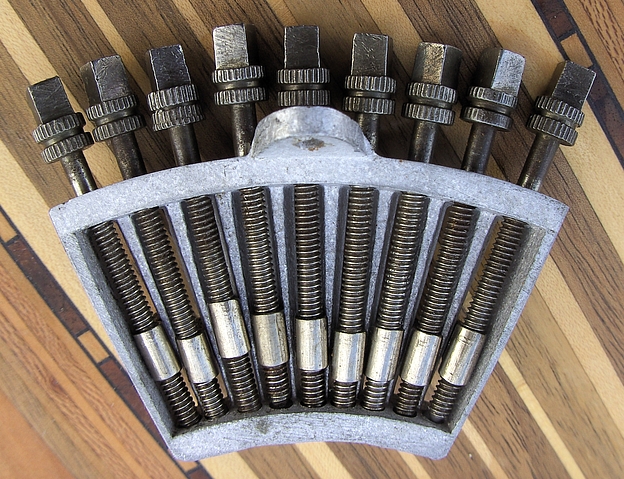 Boehm simplified his tuners in several steps until he reached his later standard design. Some Waldzithers with the early “Waldzither Fabrik” label also have tuners with a single hump in the middle, but with simpler screws that are arranged in single row and only two rings for to twist them by hand. Instruments with this type of tuners are also displayed in the 1912 Ca ta logue – and even in the 1926 Catalogue, which is clear evidence that Boehm kept on using old photos even after these tuners came out of use. 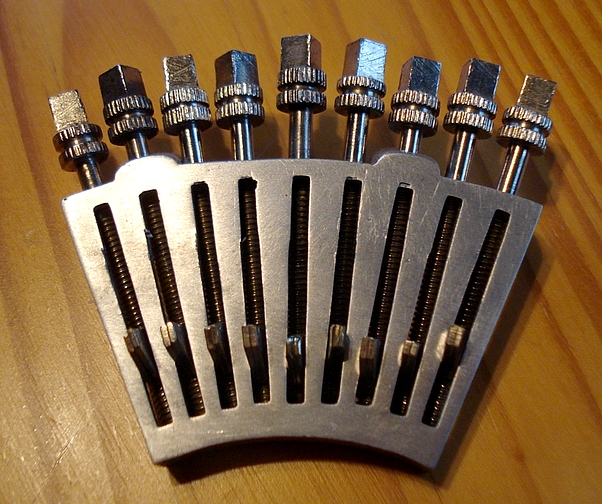 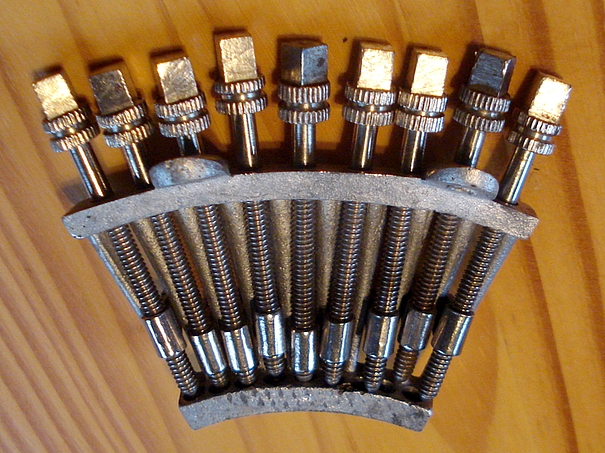 Most instruments with the early “Waldzither-Fabrik” label with “Egyptienne” font, as well as all instruments with the following label, have tuners with two asymmetrically arranged humps. This unusual design has a simple explanation: C. H. Boehm actually produced tuners with 10 slots and then reduced them to 9 slots by cutting off one of the outer slots. The tailpieces of this time also have 10 hooks. The reason for this can only be guessed: it could be that Boehm had planned to build Waldzithers with 10 strings (= 5 double courses) and had purchased machines which were designed to produce suitable tuners for them (the sketch which he added to the patent from 1914 also displays an instrument with 10 strings). A single instrument with such a tuner with two humps has 9 screws in a row and three rings. This could be another early stage in the process of simplifying the tuners (but it is also possible that someone put them together by using older “Portuguese style” screws).

Some of the Waldzithers that bear the “GR. 4. 6825” label without black bars have tuners which show a further stage of simplifying: They have only one ring left by which they can be twisted. 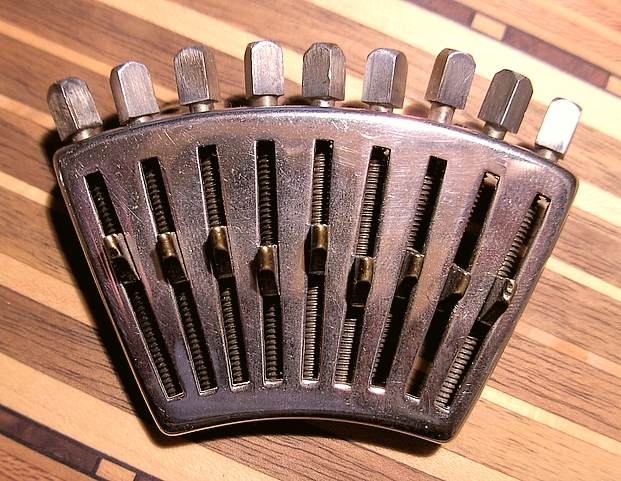 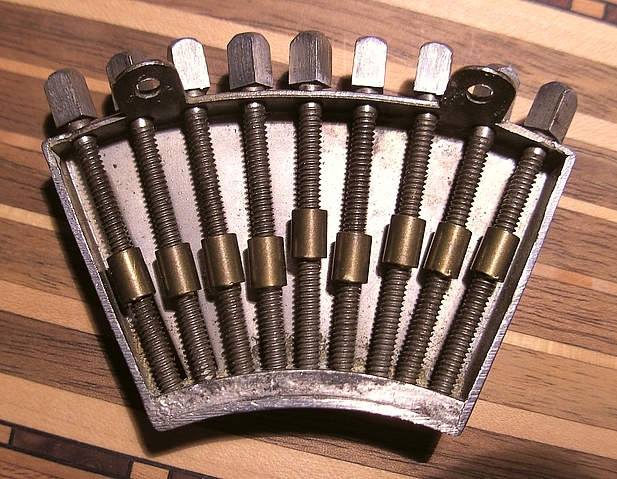 Some other Waldzithers with the “GR. 4. 6825” label without black bars already wear the standard tuners that were used on all subsequent Boehm instruments. They retain only a faint memory of their Portuguese inspiration, but, in turn, inspired the tuners of the Waldzithers which were built in the 1920s and 1930s in the Vogtland region, as well as the tuners of the well-known “Plueckthun” Waldzithers which were sold at that time in the Ruhr area and in Westphalia in large numbers.

The first GEWA Waldzithers still wear genuine Boehm tuners; this indicates that the company initially used up the remainders of the old Boehm production. But there are no GEWA instruments with the later label still displaying original Boehm tuners. Presently, three different types of GEWA tuners are known; their succession seems to be quite clear (from left to right) but there is no information available as to when the different types were actually used. The third type of tuners is much more often to be seen than the other two.

This website was built with Webnode
You can also have an impressive website for free!
Try it out