The history of the C. H. Boehm Company

Unfortunately, no business documents of the Boehm Company have survived, which means that we have no knowledge of (for example) how many people worked in the factory or how many instruments were built during the 45 years if its existence. But it is nevertheless possible to draw a rough outline of the development of the company. The hints which provide the basis for this outline are mainly found in the Hamburg address books, telephone books and yellow pages, but also in the German "Zeitschrift fuer Instrumentenbau" (= "Journal of Instrument Making"). This journal appeared from 1880 until 1943 and reported many registrations and assignations of patents, utility models and trademarks in the field of the production of musical instruments, as well as the prolongation of the terms of these assignations.

1897 Founding of the company. C. H. Boehm applies for the registration of the name "Waldzither" in the register of trademarks (May 25th 1897; assigned on October 5th 1897); this is the first sign of his acting as a producer of Waldzithers. 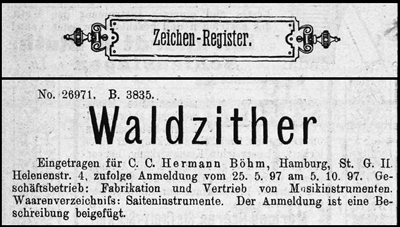 C. H. Boehm gets also two utility models assigned at the patent office. June 11th 1897: "Waldzither, consisting of a guitar body with steel strings" (No. 77344), and August 12th 1897: "A device to fix and tense strings of musical instruments, which consists of threaded spindles lying in the direction of the tension and spindle dogs in the form of hooks" (No. 80548). The latter utility model applies to the Preston tuners of the Boehm instruments; this is proved by an early instance of a tuner which has the D.G.R.M. Nr. 80548 stamped on it.

When he registers his utility models at the patent office, C. H. Boehm records the Helenenstraße 4 in Hamburg as his address (but the Hamburg address book does not list him at this place).

As early as 1897, C. H. Boehm publishes his own Waldzither tutorial (designed for self-instruction), and he also offers courses in which the playing of the instrument is taught. Soon, the first walking tours of groups of Waldzither players follow, which seem to be very popular.

On June 8th 1900, Boehm renews the term of protection for his Waldzither (the terms of protection for utility models always ran three years), but not for his Preston tuners. In the same year, he is for the first time registered in the Hamburg address book, the address being Am Borgesch 18 (which lies in St. Georg, the same town district as the Helenenstraße).

In 1901 (and subsequent years), Boehm advertises his instruments in the Hamburg address book in the following way: "Citterns: C. H. Boehm's patented Waldzithers. The first cittern without playing table, played with or without sheet music; also to be played as mandolin or cymbal". This description indicates that the term "Waldzither" was not commonly known at this time (from 1906 on, Boehm also advertised in the columns for guitars, citterns and mandolins). And he tries to win for his instrument people that are used to play with different playing techniques (mandolin, table zither, cymbal); the company also produces cymbal hammers and offers them in its catalogues until the 1930s.

In 1903, a supplement to the Hamburg address book registers the Steinthorweg 2 as the new address of the Boehm Company, which also lies in the district of St. Georg. The three addresses where C. H. Boehm lived in Hamburg all lay within a small area of a few 100 yards.

Excerpt from a Hamburg town map from 1899

On April 6th 1904, Boehm registers his Walddoline at the patent office as a utility model (No. 73575); it is assigned on November 3rd 1904. It is maybe due to the long forerun of the production that the copyright for the Walddoline is reported in the Hamburg address book only from 1906 on.

In 1906, Boehm advertises in the Hamburg address book not only his Waldzithers and Walddolines, but also guitars, mandolins and mandolinolas. From what has been said before, it could be concluded that these are only other names for his Waldzithers and Walddolines, but in fact, a postcard from 1904 proves the existence of a genuine 6-string Boehm guitar with Preston tuners in the style of a Guitarra Portuguesa. At present, this is the only piece of evidence that this type of guitar was manufactured by the Boehm Company.

On July 23th 1909, Boehm registers his Waldzither as a

In 1910, C. H. Boehm is registered in the telephone book of Hamburg with the number GR. 4. 6825, from the following year on, the telephone number is also displayed in the address book. 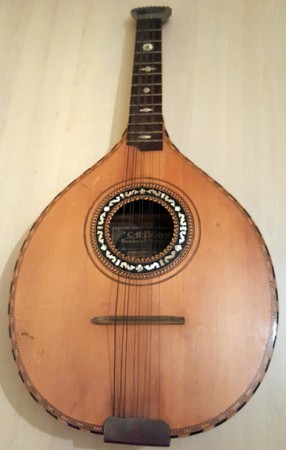 Boehm writes in a foreword of his Waldzither tutorial from 1919: "Boehm's Waldzither reached its highest perfection through a new invention (D. R. Patent), an aluminum neck which serves with its hollow interior space as a second sound box. With such an aluminum neck, a warping of the fretboard, which could in cases of influence from sun and moisture not always been be avoided, has now become thoroughy impossible."

Boehm printed his patent also on the

In 1915, guitars by C. H. Boehm are mentioned for the last time in the yellow pages of the city of Hamburg. And, for the first time, he mentions the number of his pupils, which he reports as 6.000. This shall probably mean that 6.000 pupils attended his Waldzither courses since the founding of the factory, or that they at least bought an instrument from him, which included as a free gift a Waldzither school.

In 1918, Boehm mentions a "Deutsches Reichs-Patent" in the yellow pages of Hamburg. After the end of the First World War, he seems to have managed to produce instruments according to his patent from 1914 (the Waldzither pictured above is from ca. 1920; more pictures can be found

Shortly afterwards, Boehm moves his private dwelling in the factory house to the first floor in order to make room for the expanding factory. From 1920 on, the factory is registered in the address book not only on the ground floor, but also on the first floor.

Another indicator for an expanding factory is the fact that, from 1921 on, Boehm states the number of his pupils as 20.000. This may be a bit exaggerated (for reasons of sales promotion), but can still be seen as evidence for a flourishing company. Another indication of rising production figures is the fact that by far the most Boehm instruments that are known today originate from the 1920s and 1930s.

In 1928, Boehm stops advertising the Walddoline in the yellow pages, but it seems that the production continued, as can be seen from examples that bear labels from the late 1930s.

C. H. Boehm dies on September 1st 1934. The commercial directory of 1935 already supplements the entry of the Boehm Company with the addendum "Estate". In the yellow pages, the same addendum can be found in the 1936 edition; here Ernst Boehm is mentioned for as a manufacturer of Waldzithers (although he already died on April 14th 1935).

In 1937, the address of the Boehm factory changes from "Steintorweg 2, Hamburg 5" to "Steintorweg 2, Hamburg 1". The reason for this change is the "Greater Hamburg Act" from January 26th 1937 (which became effective on April 1st 1937). With this law, Hamburg was enlarged by including towns like Altona, Wandsbek, and Harburg-Wilhelmsburg, as well as some other small villages. This also led to a reorganization of the inner-city districts, which again led to a reorganization of the post districts.

For a long time, the end of the Boehm Company stayed in the dark. But it was known that, after the Second World War, the GEWA Company had continued to produce "original Boehm Waldzithers" not much different from the original Boehm instruments. This suggested that there must be a connection but it remained wholly unclear what this connection might be. Towards the end of the 1980s, the folk musician Jochen Wiegandt asked the GEWA Company what they knew about this connection and received the answer that Georg Walther, the founder and owner of the GEWA Company, had bought the Boehm Company between 1931 and 1938. But he was also told that there are no records left which could document the exact course of events. The company did not even keep copies of their old catalogues from the post-war period; this revealed a new enquiry by Martina Rosenberger in 2002/2003.

Unfortunately, the statement that the Boehm Company was sold to Georg Walther not after 1938 is contradicted by several pieces of evidence which indicate that the Company kept on producing Waldzithers in Hamburg after the death of C. H. Boehm for quite a few years (now under the direction of Boehm's son Ernst, as it seems). This can be seen not only from numerous entries in the Hamburg telephone books, address books and yellow pages, but also from the statistically significant number of Boehm instruments which cannot have been produced before 1937 because they have the postal district "Hamburg 1" printed on their label (judging from the instruments with this label that are known today, this would amount to about 800-1000 instruments).

The entries in the Hamburg telephone books, address books and yellow pages from the years 1935-1943 indicate that the Boehm Company existed in Hamburg until 1942, but there are also hints that the company was sold before the death of Boehm's widow Margarethe in October 1942:

a) In the Hamburg address book, the Boehm Company is recorded until 1942, and Margarethe also as the owner of the factory house. The factory rooms are, in the same way as in the previous years, located on the ground floor and on the first floor; Margarethe's dwelling is also located on the first floor. In 1943, the Company is no longer mentioned and Margarethe's dwelling is now recorded on the ground floor. As the address books have quite a long forerun, this does not contradict the fact of Margarethe's death on October 22th 1942. This is clear evidence that the company was sold by Margarethe herself before she died, and that she afterwards moved (at least for a short time) to the ground floor of her house.

b) Towards the end of the 19th century, a part of the Andresen family had emigrated to the USA. After Margarethe's death; this made it difficult to substantiate the claims of some of the family members towards their part of the legacy. This is documented through an exchange of letters between the estate trustee Edgar Wessendorf and one of the heirs. If Margarethe had still been the owner of the factory (her sons Hans and Ernst having died before her) or the factory had been sold after her death, this would have been mentioned in this exchange of letters. But here, only the building at the Steintorweg 2 is mentioned, as well as a summer cottage at the outskirts of Hamburg.

The Boehm factory house and the summer cottage of the Boehm family were sold in 1956, when the legacy of Margarethe Boehm had finally been settled.

This website was built with Webnode
You can also have an impressive website for free!
Try it out