According to the researches of Dr Pilipczuk of the Hamburg "Museum fuer Kunst und Gewerbe" ("Museum of Art and Industry"), the dates of birth and death of C. H. Boehm were lost during the Second World War. Fortunately, this has recently turned out to be untrue: There are several entries in the Hamburg registers of birth, marriage and death which refer to C. H. Boehm and his family. C. H. Boehm was born in 1863 in Meiningen as the son of the master brewer Johann Friedrich Boehm and his wife Mathilde (nee Kaiser). He must have lived in Hamburg at least from the early 1890s on, for he married Margaretha Caroline Andresen in 1891. In the Hamburg marriage register, his profession is given as eninge driver, in the birth register entry of his son Ernst Wilhelm from 1896, his profession is given as machinist.

Entries in the address and telephone books of the city of Hamburg suggest that the Boehm family had at least two children:

From 1928 on, a Hans Boehm is registered with his own apartment in the house of the Boehm family/factory at the Steintorweg 2; from 1926 on, he is also mentioned in the yellow pages as a restaurant proprietor (Astra Bierhaus). This is also documented by a

But even more interesting is the fact that from 1936 on, the telephone book mentions an Ernst Boehm as a manufacturer of Waldzithers - under the address and telephone number of the Boehm company! And the entry under C. H. Boehm simply reads "see Ernst Boehm". In the yellow pages of the same year, the entry "C. H. Boehm" is supplemented by the word "Nachlass" (Estate). This suggests that the company was carried on by his son Ernst Wilhelm (born on December 8th 1896). Although Ernst Boehm dies on April 14th 1935, he is registered in the telephone books of the following years as a producer of Waldzithers (for the last time in 1942). 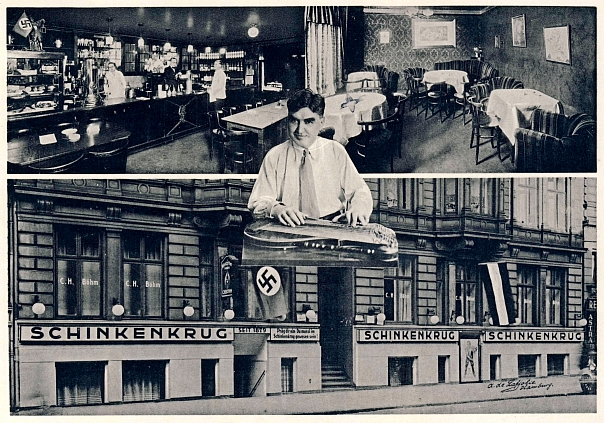 The Boehm Company (resp. the bar "Schinkenkrug" and its owner) in 1936

It seems as if Hans Boehm also died before his mother. This can be concluded from the fact that his name vanishes from the address and telephone books of Hamburg after 1943, as well as from further material provided by Robert Andresen. This material refers to the legacy of Margarethe Boehm who died in October 1942 and therefore almost at the same time as her sons. As several of Margarethe's brothers emigrated in the late 19th century to the USA, the search for her heirs took more than ten years; this is documented by an exchange of letters between Robert Andresen's father and the German estate trustee Edgar Wessendorf. The legacy of Margarethe Boehm comprised the house at the Steintorweg 2 (which survived the war without much damage), a summer cottage at the outskirts of Hamburg (on the Luebecker Chaussee 169 in Hamburg-Sasel) and ca. 500 RM cash assets. But it did not comprise the Boehm factory, which was sold to the GEWA Company during Margarethe's lifetime

The Boehm family at their summer cottage in Hamburg-Sasel; Photo: Robert Andresen

Estate trustee Wessendorf concentrated his search for the heirs of Margarethe Boehm on her brothers and their children in the US; in a letter from 1951, he mentions the still living descendants of her brothers Johannes Heinrich and Nicolaus as the sole heirs. This letter also states that her brother Paul (who lived in Germany on the island of Sylt) had enjoyed the beneficial interest of the two buildings until his death in 1951, which shows that Margarethe must made this provision in her testament. This leads to the conclusion that Ernst and Hans Boehm must have died before their mother without founding their own family, for otherwise a testamentary provision of their mother would not still have been valid. Only as late as 1956, the problems surrounding the legacy of Margarethe Boehm were resolved and the house at the Steintorweg 2 changed hands.